The Blockchain technology is still quite hard to understand for people. Within the blockchain hype, smart contracts are seen as the next step in the evolution and as a disruption in several industries. One interesting fact is that smart contracts were already defined 14 years before Bitcoin by Nick Szcabo, a computer scientist and cryptographer. He published an essay “Smart Contracts: Building Blocks for Digital Free Markets” in 1996. 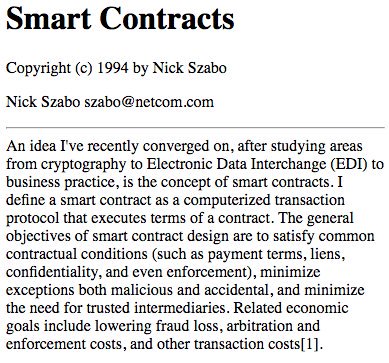 Nick Szcabo wrote later that the main idea of smart contracts is that contractual clauses (for example bonding, delineation of property rights) can be embedded in hardware and software in order to make a breach really expensive for the contract breacher.

Ethereum is a cryptocurrency based on a decentralized application using smart contracts which inspired a new economy, also called “token economy”.

The cryptocurrency Ethereum, as decentralized application through smart contracts inspired a new economy, which is also called the “token economy”. Initially, smart contracts were built upon the Ethereum protocol in order to operate by individually predefined rules (price and quantity) without a third party. New applications known online as “Know Your Customer” can be defined as digital identification processes that started a discussion about how these technologies can be used to tackle global challenges such as climate change.

Smart contracts aren´t really “smart” in the understanding of intelligence, neither it is a “contract” in the legal understanding.  It is a container (standard unit of software that packages up code) of an open source code running on nodes within a decentralized blockchain. The code contains a set of rules under which parties agree to interact with each other. Some key features of smart contracts are:

Even if many people don´t understand this technology and consider that is far away to be accepted on a legal basis, it has to be noted that a number of American states like Arizona and Tennessee defined smart contracts on April 2018, by law.

These kind of technologies will change markets; it is not a question of how but when it´s going to happen.