As a management and finance consultant I’ve always been intrigued by patterns, not only in nature but also in some situations or circumstances that face many companies and startups. Patterns are everywhere and are defined by the Cambridge Dictionary as a particular way in which something is done, is organized, or happens. (1)

Mankind has analyzed patterns in mother nature projecting them in art, biology, mathematics, music, history, architecture, finance and in many other fields. Such patterns have been applied in many works and are real examples of our reality we are experiencing in this universe.

Here are some examples: 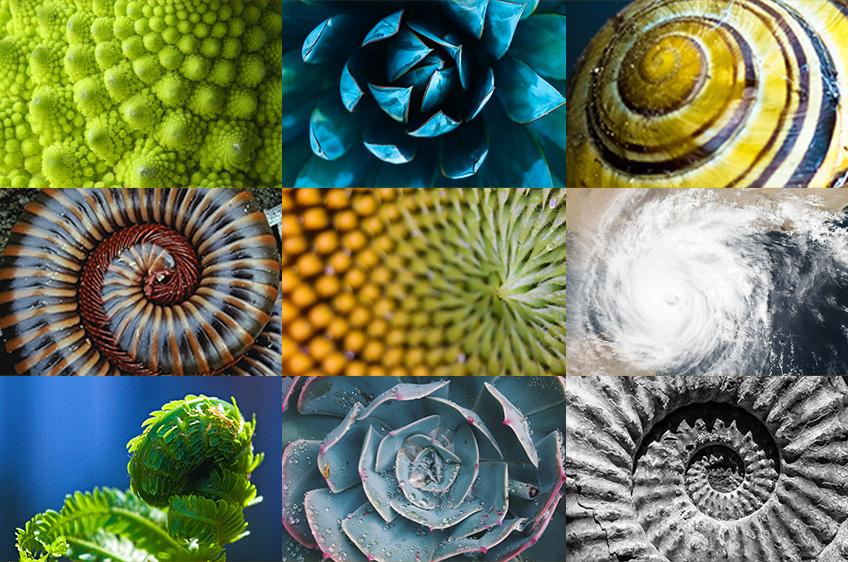 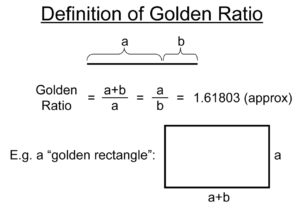 The Greeks use the letters ϕ or φ to represent the golden ratio. It is calculated as follows:

If we use this formula we can get the golden spirals or a Fibonacci spiral.

Fibonacci (c. 1170-  1250) also known as Leonardo of Pisa or Leonardo the Traveller from Pisa popularized the Hindu-Arabic numeral system in the Western World. He used the golden ratio in related geometry problems, though never connected it to the series of numbers named after him. (2)

The Fibonacci sequence is shown as follows:

By the way, Leonardo Da Vinci (1452 – 1519) who illustrated Luca Pacioli’s book, Divina proportione (1509), called the golden ratio as section aurea (golden section) and used this proportion or ratio in many of his paintings and works.

The interesting thing here is that a German mathematician Simon Jacob was the one who noticed that consecutive Fibonacci numbers converge to the golden ratio.

As you can notice, a given number equals the sum of the previous two consecutive numbers and therefore the golden ratio is the limit of the ratios of successive terms of the Fibonacci sequence (or any Fibonacci-like sequence), as it was discovered by Johannes Kepler (c. 1571-1630), another German mathematician.

Now let’s talk about the Fibonacci sequence in finance. A financial market analysis is based on data, graphs, price patterns and quotes. Fibonacci retracement is part of the technical analysis or more particularly a method to analyze and obtain support and resistance levels in prices. 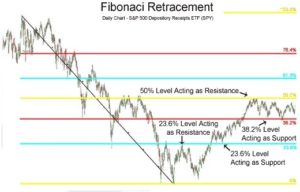 The name of this analysis comes after their use of the Fibonacci sequence. In other words, this financial analysis helps to verify correction price levels of a financial asset. These corrections help to identify support and resistance levels through retracements. (3)

The most common and used Fibonacci cycles are 23.6%, 38.2% and 61.8% to identify retracements. This financial analysis is very well used by investor due to its simplicity and convenience. 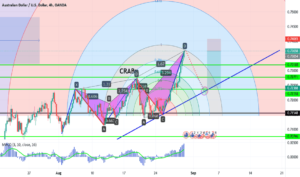 Here we can see a real example of the Fibonacci retracements in the financial markets. 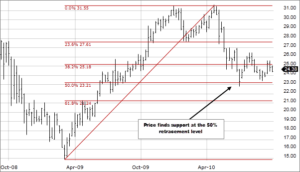 Finally, we can see that patterns, specifically the Fibonacci sequence, is used in many fields. In finance the Fibonacci retracement is used to identify support and resistance levels in prices or quotes of many financial assets. The beauty of patterns is at the eye of the viewer.